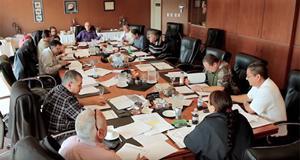 The FMB operates as a shared governance institution under parts three and six of The First Nations Fiscal Management Act (FMA).

The FMA sets out our purposes, functions, and powers. It also establishes an-at-arm’s length relationship between the FMB and the federal government. Under this governance model, the FMB is not an agent of the crown.

We are accountable to the Minister of Indigenous and Northern Affairs Canada. The FMB Board of Directors is responsible for the overall direction of the FMB. The Board ensures that the FMB fulfills its legal and regulatory mandate under the FMA.

The Board is made up of between nine and thirteen directors, including a Chairperson and Vice-Chair. A majority are named by the Governor in Council, and up to three members are appointed by the Aboriginal Financial Officers Association.

View the FMB Board Appointment Process.