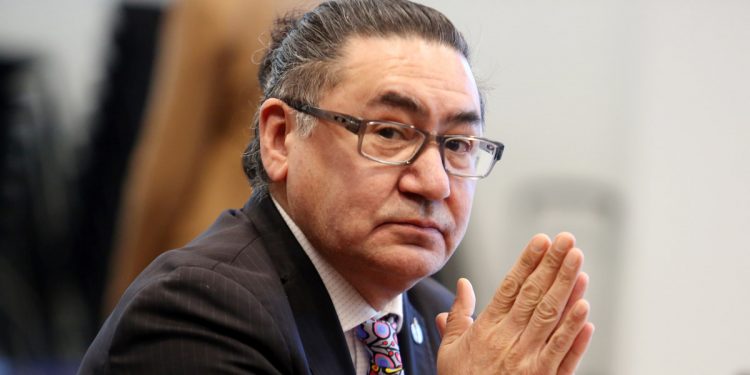 The last Parliament took a significant step forward in advancing reconciliation with the adoption of the United Nations Declaration of the Rights of Indigenous Peoples, which was first brought forward in 2016 as a private member’s bill by former NDP MP Romeo Saganash. This was progress and it has also raised expectations, write Harold Calla and C.T. (Manny) Jules.
The Hill Times photograph by Andrew Meade.

Canadians must realize that if reconciliation is not dealt with and strategies are not implemented, Canada’s economy is going to be impacted.

Reconciliation with Indigenous peoples was a theme for every party’s platform in the recent election. This is progress, and we congratulate every Member of Parliament on their recent electoral success. Talking about policy is good, but implementation is key and for too long, Canada has fallen short on implementation. Means and mechanisms are needed on a government-wide basis to implement the policies that have been put forward. How will the government best engage and improve the economic environment for First Nation communities?

This inaugural National Day for Truth and Reconciliation is about social and economic reconciliation and bringing recognition of First Nation presence in this country. Too often, that is not the case. Too many Canadians don’t know how title and jurisdiction was taken from Indigenous nations or even the communities and original inhabitants of where they live. We think recognition of that is the first step.

Government and MPs in this new minority Parliament are going to have to make tough decisions, and one should be to recognize that the Indigenous policy of the last 150 years has failed.

Canadians must realize that if reconciliation is not dealt with and strategies are not implemented, Canada’s economy is going to be impacted. For much of the past decade, too much of Canada’s wealth has been locked up and unrealized. Valuable projects have failed to get off the ground because they did not get the free, prior, and informed consent of Indigenous peoples for activities on their traditional territories. Indigenous governments face challenges themselves. There are 634 Indian Act nations with a wide range of financial and administrative capacities that may need support to function as modern-day governments. The Canadian government wants confidence that there are ways to mitigate risk in fiscal transfers. But there is also a growth story—Indigenous communities and governments across the country bring a lot to the fiscal table.

During the pandemic, the First Nations Financial Management Board (FMB) undertook research to demonstrate to Canada what the own-source revenue impact would be to First Nation communities. We found that the Indigenous economy was worth $17.5-billion a year. How many Canadians know that? We are already contributing. The Indigenomics Institute estimates that, with the right investment and growth, Indigenous people in Canada have the potential to add a $100-billion annual boost the national economy. Clearly all will benefit by advancing the Indigenous economy and reconciliation.

The last Parliament took a significant step forward in advancing reconciliation with the adoption of the United Nations Declaration of the Rights of Indigenous Peoples. This was progress and it has also raised expectations.

Indigenous peoples across Canada are expecting a fundamental change in their relationship with Canada. They want more than just government to help them manage the poverty that has been created in their communities. They are expecting a true nation-to-nation relationship. A relationship that shares power and enables all parties to generate wealth. We encourage every MP to view these raised expectations as opportunities.

The First Nations Fiscal Management Act (FMA), 2005, and subsequently the FMB and the First Nations Tax Commission (FNTC), along with other institutions, were the beginning of that process. The FMA framework promotes transparency and accountability from an Indigenous governing body to its citizens, and the strong governance and fiscal management practices which give confidence to external stakeholders.

Over the coming months the FMB and FNTC are going to collaborate with other First Nations on the development of a new Indigenous-led, risk-managed framework for a new fiscal relationship with First Nations and a meaningful implementation of UNDRIP’s goal of self-government and the right of self-determination.

We will be calling on all parties to come together and support this framework. It will implement the promises that each party has made, create a government-to-government relationship, and create a new fiscal relationship with Indigenous communities.

We look forward to engaging you in this work.

Harold Calla, Executive Chair of the First Nations Financial Management Board and member of the Squamish Nation, has experience in international business, as a negotiator in the areas of economic development, land management and finance, and an arbitrator for First Nations in Western Canada.

C.T. (Manny) Jules is an Indigenous thought leader and the long-time Chief Commissioner of the First Nations Tax Commission.