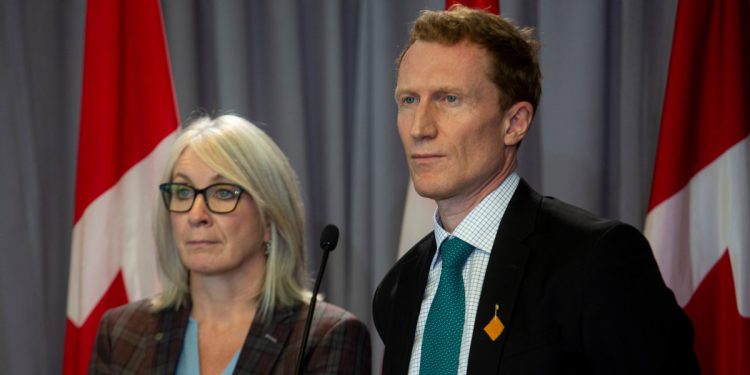 Indigenous Services Minister Patty Hajdu and Crown-Indigenous Relations Minister Marc Miller are pictured at a press conference in Ottawa on Oct. 27, 2021. We don’t need Canada to show us the way, instead we need Canada to follow our lead, provide necessary support, and then step out of the way, write Harold Calla and C.T. Jules. The Hill Times photograph by Andrew Meade.

Most new monies for First Nations are going to old colonial systems that have consistently failed to meet their needs.

We hope that last week’s federal budget is not a missed opportunity for Canada to make meaningful changes in its relationship with First Nations—but it may be unless it is accompanied soon by legislation that expands First Nations’ jurisdictions and institutional support. Despite $10.6-billion of new investments over five years in the chapter on reconciliation with Indigenous Peoples, this budget failed to move forward on the government’s key reconciliation mandate: to advance self-determination for Indigenous Peoples as quickly as possible.

Most new monies for First Nations are going to old colonial systems that have consistently failed to meet their needs. For instance, the budget invests $4-billion in new housing, but does nothing to change the pay-as-you-go systems that support First Nations housing. Economic reconciliation and the United Nations Declaration on the Rights of Indigenous Peoples (UDRIP) call for the government to implement Indigenous-led solutions for long-standing issues such as housing and infrastructure.

These failures are the result of a program-based model that does not engage the private sector, where better products at lower costs in shorter periods of time are main goals. These failures are the result of a broken system. It takes five times as long to get infrastructure built in a First Nations community as it does in a non-Indigenous community. Systemic failures do not require minor improvements, they require systemic changes. Investments in infrastructure are not simply buildings or assets, but require economic development and employment for lasting impacts for our communities and Canada as a whole.

The approach taken in this budget appears to be in opposition to the mandate letter for the minister of Crown-Indigenous relations: “Your first and foremost priority is to work in full partnership with First Nations, Inuit and Métis to continue building nation to nation relationships and support self-determination, including supporting First Nations communities as they transition to self-government and move away from the Indian Act.”

We hoped for more in the budget to advance this new relationship. Much of the budget for Indigenous Peoples increased the role of Indigenous Services Canada (ISC), a department whose mandate is to wind down its operations. This lack of power and systemic change is all too familiar to us. The Indian Act was created by the Government of Canada and imposed without consent upon First Nations governments. It continues to undermine an efficient and sustainable transition to self-government. It limits our ability to contribute to the economy, to the benefit of all Canadians.

We don’t need Canada to show us the way, instead we need Canada to follow our lead, provide necessary support, and then step out of the way. We have been saying this for years: we want more control, and to operate within our systems, not colonial systems. Isn’t that what UNDRIP was about?

The FMA institutions have started the RoadMap Project to identify for Canada many of the steps that need to be taken to build our systems and supports and enable necessary systemic change.

If the federal government doesn’t want last week’s budget to be another missed opportunity, then it needs to take some of these steps, such as monetizing transfer payments to help facilitate infrastructure development through FNII, expanding the FMA, and enabling more First Nations fiscal powers in the FMA. We encourage the government and all Parliamentarians to get on board with systemic changes and advance economic reconciliation by supporting the successful innovations advanced by the more than 320 First Nations that work with our FMA institutions.

Harold Calla, FCPA, FCGA, CAFM, is executive chair of the First Nations Financial Management Board, member of the Squamish Nation, with experience in international business, as a negotiator in the areas of economic development, land management and finance, and an arbitrator for First Nations in Western Canada. C.T. (Manny) Jules is an Indigenous thought leader and the longtime chief commissioner of the First Nations Tax Commission.