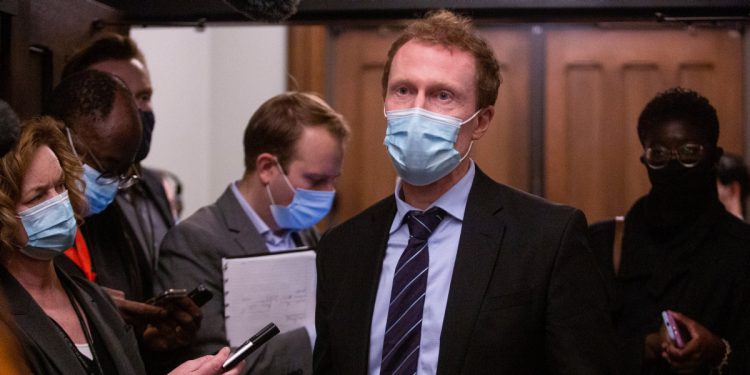 Crown-Indigenous Relations Minister Marc Miller is pictured in the West Block on Nov. 16, 2021. The current fiscal relationship for First Nations is largely based on parliamentary appropriations, and not the ability of First Nations to raise their own revenues, write Harold Calla, C.T. Jules, and Ernie Daniels. The Hill Times photograph by Andrew Meade.

A new fiscal relationship needs to be based on sharing direct revenue raising powers to improve the ability of First Nations as governments to debt finance, improve their infrastructure, and undertake the meaningful investments needed to attract investment.

Now that Parliament has reconvened and as its members reflect on our nation’s priorities, it is long past time for meaningful focus on an ignored issue: Canada’s need to move Indigenous economic reconciliation forward.

For too long, First Nations and Canada have been fighting in the courts on the lack of consultation or accommodation of Indigenous rights and title. The resulting lack of clarity and the legal battles has led to delayed or failed projects, and assets being stranded in the ground.

Now it is time for Canada to move forward in co-operation and partnership with Indigenous peoples. A practical, new framework for economic reconciliation that is consistent with the new requirements implied by the new United Nations Declaration on the Rights of Indigenous Peoples (UNDRIP) is needed.

This month, the FMA institutions are publishing a solution: a “RoadMap” project, outlining how Canada and First Nations can progress down the path from managing poverty to creating wealth. A key goal is to bring fairness and reconciliation to the fiscal relationships between First Nations and Canada.

Six pillars are expanded on within the RoadMap project. These are designed to meet the practical needs of First Nations governments: statistics, infrastructure, economic development, jurisdiction and expansion of fiscal powers, strength through working together, and governance.

Implementing these pillars would prepare First Nations to manage their finances and government, participate in economic development, and establish a new relationship with Canada. Many Nations are clamouring for economic development. The FMA institutions already have critical mass. Three-hundred-and-twenty-one First Nations governments are currently participating in the FMA, well more than half of the 579 Indian Act First Nations, and that number keeps growing. Recent research has shown that projects in First Nations communities with a Financial Management System (FMS) certification have expected outcomes 72 per cent greater than First Nations without. In addition, there has been a growth of 64 per cent in Own Source Revenue for FMS certified First Nations, from 2014-2019. Access to affordable capital through the FNFA has supported $1.65-billion in new financing, and the creation of more than 17,000 new jobs. This success can be built on by advancing the Indigenous economy and reconciliation.

The main challenge to advancing the RoadMap is fear. Government is afraid to remove some of the oversight that they have had over First Nations communities. The private sector is afraid of what the future will hold, being uncertain about new responsibilities.

The current fiscal relationship for First Nations is largely based on parliamentary appropriations, and not the ability of First Nations to raise their own revenues. We call this a dependency-based relationship. It means funding levels and priorities are determined by the federal government. This relationship consumes significant administrative resources. It does not support First Nations in activating their economic potential. It can often leave them powerless to meet their own community’s priorities.

A new fiscal relationship needs to be based on sharing direct revenue raising powers. This will improve the ability of First Nations as governments to debt finance, improve their infrastructure, and undertake the meaningful investments needed to attract investment. Economic growth for First Nations leads to growth for the surrounding communities, and the economy as a whole.

Healthy economies lead to healthier communities and a path out of poverty. Instead of saying “no” to economic development, many communities, with free, prior, and informed consent, will instead choose to say “yes” to working with the private sector. This is a win-win-win outcome for the government, for the First Nations, and for Canadians.

Over the coming months the FNFA, the FNTC, and the FMB are going to continue to collaborate with First Nations, federal, and provincial governments on the development and implementation of the RoadMap. This Indigenous-led, risk-managed framework for a new First Nations fiscal relationship is a top priority. It will bring meaningful implementation of UNDRIP’s goal of self-government and the right of self-determination. It will make Canada more equitable and reliable for growth and investment.